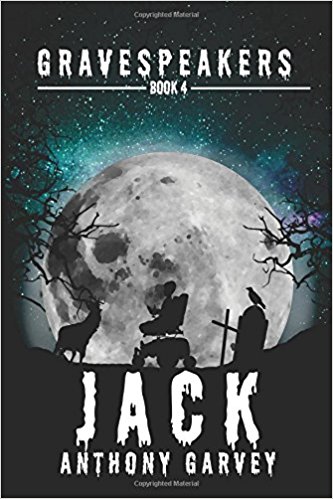 Aimed at 7-11 year olds, ‘Gravespeakers: Jack’ is the fourth in a seven-book series. Each of the Gravespeakers’ books tells the stories of a different child who discover they have a special gift on their twelfth birthday, they can communicate with the dead.

The first four books feature Maria from Tarbert, Ruth from Ballybunion, Crispin from Dingle and Jack from Killorglin. The final three books in the series will be released in 2018.

“The books are spooky without being scary and are for children who love feeling the hairs on the back of their neck stand up while listening to ghost stories around the campfire,” said Anthony Garvey. “I have done readings in over 30 primary schools in Munster and the reaction has been very positive.”

The new book is inspired by Millstreet’s Joanne O’Riordan, one of ten people worldwide born with Tetra-Amelia Syndrome.

Like Joanne, Jack, the twelve-year-old hero of the book, was born without arms or legs, but refuses to allow it to hold him back or define him as a person, preferring to focus on what he can do instead.

Set in Killorglin in County Kerry, the latest book tells the story of Jack McCarthy, who must save Killorglin’s famous Puck Fair from imminent disaster in just 30 hours.

Anthony is currently running a competition on www.gravespeakers.com. The winner will become the main character of book 5 in the series.

They will contribute to the direction and shape of the story and help with the marketing and social media promotion of the book. All the competition details are available on the website.

For more on the books and where to get them, contact Anthony on 087 79 79 2 79 or anthony.garvey@quinngarveypr.com.