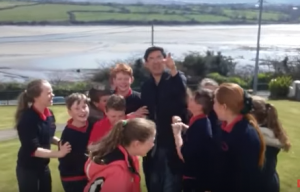 A TRALEE-BASED author launched his third children’s book on Monday, in the scenic surroundings of  An Clochán National School at the foot​ of Mount Brandon where the book is set.

Anthony revealed there will be three further books in the series with book four​, Gravespeakers: Jack, inspired by the life of Millstreet’s Joanne O’Riordan.

The main character is wheelchair bound and like Joanne O’Riordan suffers from Tetra Amelia Syndrome, a rare disorder characterised by the absence of all four limbs.

One child will win the chance to become the star of book​ 5 in the series. All they need to do is do a short review of Gravespeakers: Crispin and it could be them! Details can be found on http://gravespeakers.quinngarveypr.com/competition/

“I run creative writing workshops in 14 primary schools in Munster and the reception the kids are giving to the Gravespeakers’ books is phenomenal,” said Anthony. Here he is at the school in Cloghane on Monday attempting to do a reading, but he doesn’t get too far…