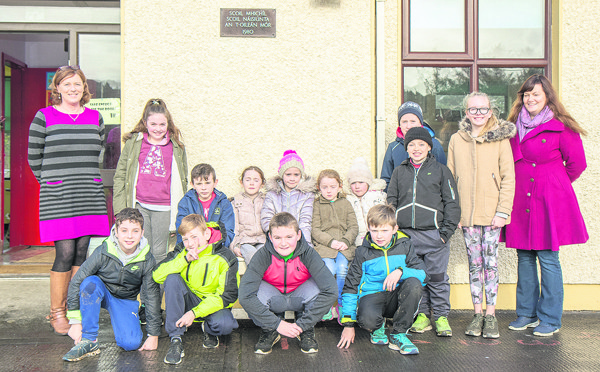 BERE islanders are working to source housing to encourage people, especially families to move there.  It keeps numbers up at school, which is now the only one left on an island in Bantry Bay.

‘Five pupils will leave to start secondary school in Castletownbere.  But we have only three children due to start school. We don’t have anyone in second class, as there was no intake that year,’ she said.

However, the community is actively working to encourage people to relocate there.

West Cork’s islands are taking a population battering.  Sherkin Island’s school closed, after 124 years’ service to the community, in 2016. Securing housing for new families has regularly been quoted as a reason why the islands are not sustaining their former populations.

John Orpen, chairman of community group Bere Island Projects Group said: ‘We are working with a number of agencies to source housing on the island.  We hope this will encourage families, to move here, which in turn will keep our island school going. To lose the school would be a huge loss to the island.’

Scoil Mhicil Naofa is now the only school on Bere Island, which in the early 1900s, once had a total of three schools.

Neighbouring islands in Bantry Bay, Whiddy and Dursey also had their own schools. The school on Whiddy Island closed in 1947 with seven children on the roll, and the Dursey Island school was forced to close in 1975 when there were just five pupils left.

The original Ballinakilla National School was badly damaged in a fire in 1978. The school moved to a temporary premises in the island presbytery until a new purpose-built school, Scoil Mhicil Naofa, opened its doors in 1980.

On the day The Southern Star visited the school, it was a hive of activity. The pupils and their teachers were in the midst of final preparations for a visit to the Primary Science Fair in Limerick, where they were to showcase a project they had put together.

Children’s author Anthony Garvey was on a school visit to give a talk to the senior class, and the younger pupils were keen to show their innovative “buddy bench” in the playground.

‘If a child is feeling lonely, or just not up to playing on a particular day, they can sit on the bench and it’s a sign for other children to join them and keep them company,’ explained junior room teacher Katrina Ladden.

Physical activity is a big part the curriculum.

Ms Ní Donnchada said: ‘We were actually one of the first schools in Beara to start weekly swimming lessons.’

Once a week, the children travel to the Westlodge Hotel in Bantry for their lesson. ‘Being on an island just means it takes a bit of extra planning. Whereas a mainland school needs to organise a bus to Bantry, we need to organise a boat to get us to the bus!’

The principal outlined how, in 2017, the pupils took part in an entrepreneur programme which saw them design a postcard for Bere Island, oversee its production and arrange for it for it to be sold in venues throughout Beara. ‘It was a huge success, they made a €200 profit and used some of the money to buy a school pet, a hamster called Jerry. They now have a rota in place for each child to take Jerry home at weekends and holidays. I was amazed at how well they did with their postcard, and I was so proud of them.’

She feels that ultimately teaching in an island school doesn’t pose any major challenges. ‘It all takes a little bit more planning, but the very nature of an island community means that people always rally round to help out. The shcool is very much part of the community here, and we know anytime we need any assistance in arranging something, we only have to put the word out, and it happens.’

Courtesy of the Southern Star

Would you like me to come to your school?  Check out the school visit programme by clicking here: